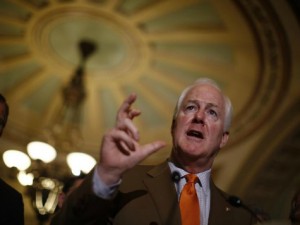 Whether you are on the side that thinks Cornyn’s proposed new law to tie money for mental health to gun purchase restrictions is great for public safety or a travesty for freedom, you should be aware that there is a very large loophole present in the law that few people are mentioning. On closer inspection, the law may not present much of a change for anyone and could qualify as a red herring. There are only certain people the law would affect and the percentage of those people that commit gun violence is rare.

What the law proposes to do

The law is a watered down version on tightening restrictions on background checks for gun purchasing. The ideal is to increase the self-reporting of states to the federal database of those who have been declared mental incompetent through being committed for psychiatric treatment. As stated in all of the press releases about this definition it covers most of the people who are either living in residential treatment homes or are in forensic prison units. The law would then also require all dealers to check the database before approving the purchase of a firearm.

If you look at the past decade of gun violence and mass murder in the US you will discover that the majority of the perpetrators all had a serious mental illness. However, a very low percentage of the perpetrators were considered to be legally mentally defective or have been committed to mental institutions in their lifetime. You must remember that the act of commitment is involuntary and comes with a limited hold allowance on the person. Outside of forensic sentencing, most law agencies and social welfare agencies will commit a person for observation and that commission then evolves into a voluntary stay in a mental institution. The mentally ill who have been committing the greatest acts of gun violence have rarely been institutionalized, although they may have a history of care.

More disturbing is the other parts of the definitions

While no one will argue with the expanded definition including reporting violent criminals to the database to prevent sales, many people will take issue with the required reporting of substance abusers to the database. The inclusion of a person in the database would also appear to be a lifetime ban. There is no statement of process for removal of the name or challenge of the submission of a name. For a recovered substance abuser, this can be a gross violation of their civil rights.

Also at issue is the tie to grant monies for reporting. The incentive style payment plan of providing more money to law enforcement officials for education and training on interventions with the mentally ill is something that is contentious. Incentive based funding has a history that is less than spotless in encouraging accurate and accountable reporting methods. The inclusion of social workers as reporters in the new system also gives rise to questions about discriminatory practices. While the law encourages the reporting of domestic abusers, substance abusers and the mentally unstable it pays lip service to a legal definition of criminal findings against the person for those charges. By including social workers and tying incentive grant monies for mental health care there is a potential for people to be motivate to report those who have not been legally found guilty of a qualifying crime or state as is supposed to be required by this law, in that case you should look for the best personal injury attorney for your case.This is a compromise law that promises to spend most of its life in the appeals courts, if it makes it fully to life as law at all.